travels with a bicycle in the drôme

Posted on May 21, 2015 by www.pinkhousefoods.wordpress.com

There is a liberation and independence to cycling alone for miles which is very particular.  Horse riding has similar elements but you are always mindful that you are sitting on another animal with opinions who, like all of us, will have good days and bad.  Both share a quick absorption in to the landscape so that things are perceived which flash past unremarked in a car.

the gateway to the elvish kingdom

When I arrived in London my bicycle was a part of me.  At a time when a car was an unimaginable luxury and transport was dirty and irregular it provided a passage to freedom, sailing over the Thames at 3am, pedalling furiously up Haverstock Hill to go to work, picnics by the river in Teddington.  Now London has more cyclists than ever, but their death rate is the only increasing road fatality and, to ride now needs something of the spirit of a gladiator.  Flowers remembering dead souls wilt on lampposts.  The tribes of pedallers press on, but for me it is not much of a pleasure.  There are lots of testosteroned young men, erroneously imagining that some sympathetic Charon, clad in lycra, will watch over them as they charge, full pelt into traffic, ignoring red lights.  There are the lovely folk of west London on pastel-coloured retro machines, who have seen far too much Julian Fellowes, fondly imagining that if they dress the part – tweed jackets, Liberty print frocks, old woolies, they are travelling down the Broad on their way to tea at Magdalen some time in the 1930s, not negotiating Hyde Park Corner today at 8 in the morning.  Tourists wobble the wrong way down one-way streets on Boris-bikes, obsessively filming themselves.  I always feel a ludicrous adrenalised sense of achievement when I cross London, glad to be alive, utterly wired, and wondering when it will be my turn to encounter the truck.

torrential rain and not even halfway. rock in the background is the plateau of the vercors where the resistance finally got itself together

This part of France is empty. Even in high summer there is hardly anyone here, but now you can cycle for 5 or 6 hours and meet nobody.  Yesterday I decided to go to Saint-Nazaire-leDésert because it’s just a great name.  Who was this dude, and why the desert?  Anyhoo, while my village is remote, Saint-N takes it to a new level of wilderness.  Huff and puff up a hill to pass through the rocks, which is the entrance to another landscape.  In summer it looks like Arizona, now, still green, it is just slightly alien.  Conical hills rise out of huge grey glaciers which look like the paws of some enormous saurus and the landscape is empty.  There are no villages to stop and refill the water bottle and get something to eat, you are completely alone.  Slightly frightening, but in a good way. 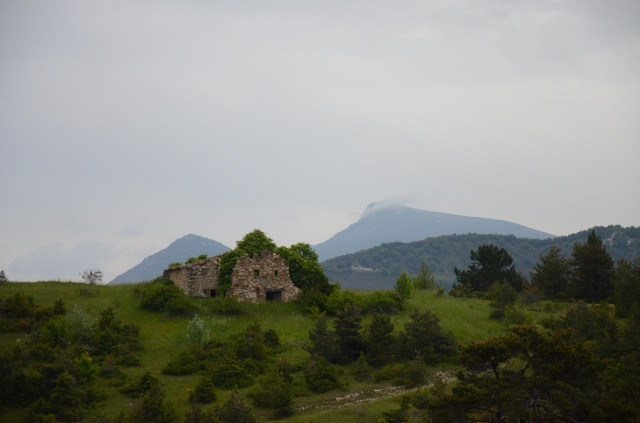 thick cloud rolling down from the mountains, rain even heavier

It is so easy, for a woman of a certain age to have a very safe life.  Assuming physical and mental health, the coasting from children leaving home to entering one oneself is smooth and painless, odd potholes in the road but I have seen in others those 30-40 years slip seamlessly down.  Perhaps this new passion of mine is merely a bicyclical rattle before slumping in a heap to review payment options for the stair lift, I hope not.  What I love is the complete solitude, time to think, to sing badly.  At a time when strength often diminishes it is cheering to become stronger.  We are all, of course, tremendously independent and competent in the professional and domestic sphere, but to be physically self-reliant is a wonderful thing.   A day’s ride through empty France is a fleabite to those half my age who run up K2 or march across the Poles, but it is more of a stretch than lunch in a National Trust property.  We should not go gentle.

This entry was posted in Uncategorized. Bookmark the permalink.

1 Response to travels with a bicycle in the drôme